Growing your own bread 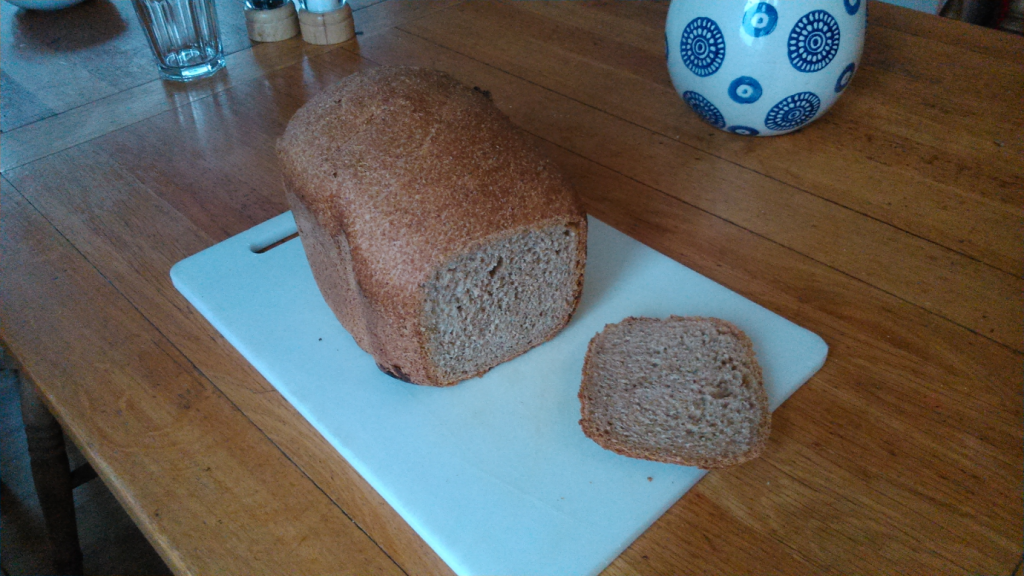 Growing your own bread

Ahhh bread…. What can beat the smell of freshly baked bread in the morning, or the taste of a slice of hot buttered toast?  Wheat flour is such a major part of our diet, but how much do you know about how it’s produced?

Paul Lovatt Smith explains how he’s able to get from a bag of seeds to a loaf of seeded bread without ever leaving his home.

For most of us, our involvement in, and knowledge of the production of wheat and flour tends to be minimal. So, one of the goals I had in mind when I started to grow my own food was to try to include bread. 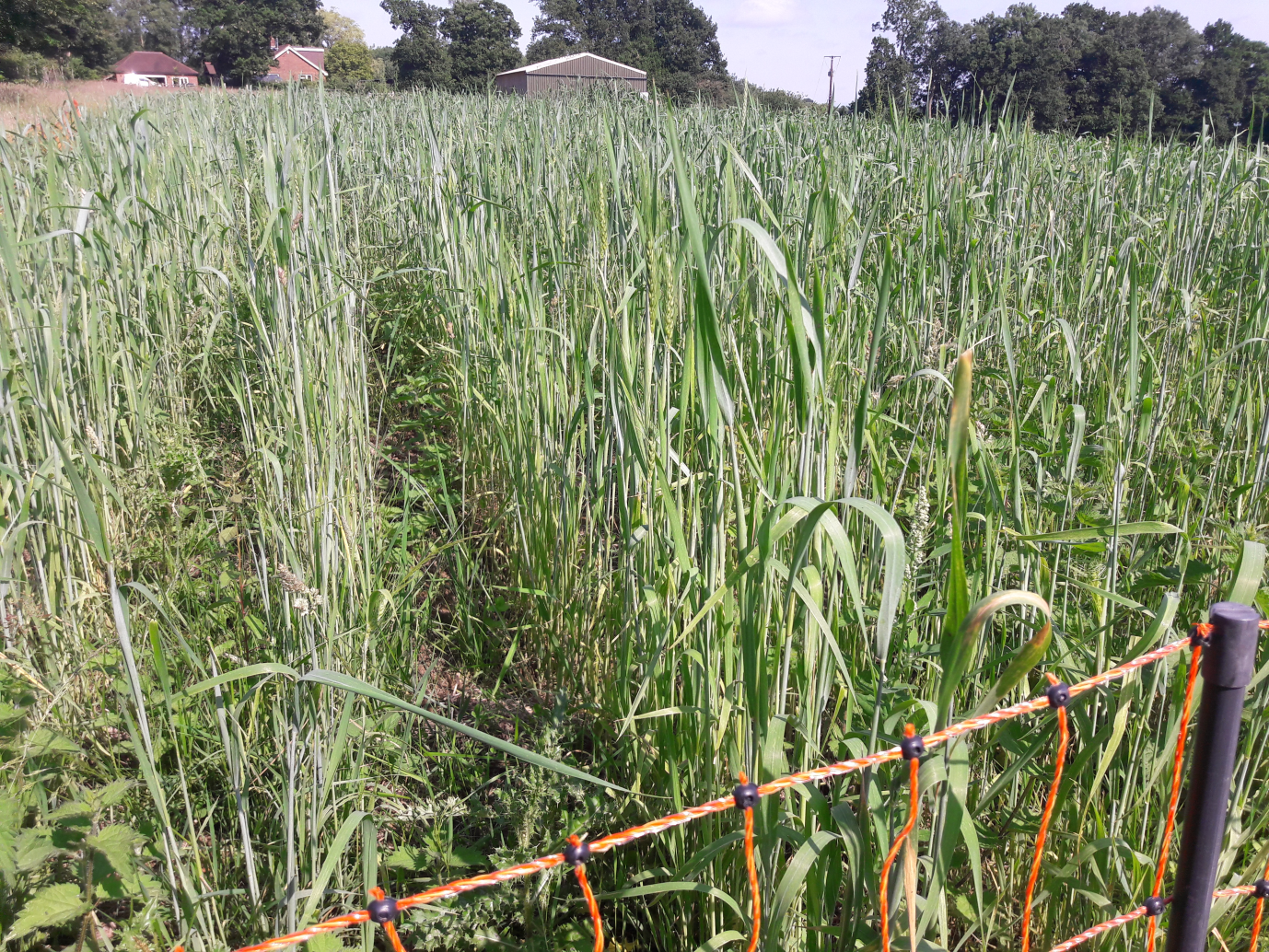 This is the wheat that Paul grew. And harvested, threshed, milled, baked and ate.

Wheat and cereals are an integral part of the traditional/organic farming system that I wanted to try.  When I learnt that wheat flour is among the most pesticide-ridden foods that we eat, this made me even more determined.  After 17 years of experimentation, failures and successes my method has more or less stabilised to the point where I feel that I can share it with an unsuspecting public, although please note that other methods are available.

In common with a lot of my farming, I’ve found that the methods which work best on a small scale are a far cry from those used by my commercial neighbours.  In fact, they would be more familiar to a prehistoric farmer than a modern one.  This is largely to do with scale:  when you are growing enough for yourself only, you can use hand tools.  When you use hand tools, growing becomes an end in itself.  High yields are not the be all and end all.  Weeds are less of a problem.   That said, some mechanisation is very helpful, as you will understand as you read on.

Using the natural fertility of the soil is a key part of the method that I use.  For much of this I have to thank the renowned German biodynamic farmer, Friedrich Wenz, whom I was lucky enough to meet when he gave a one-day course on his methods at Tablehurst Farm, Forest Row, a few years ago.

I have never met a farmer with a more close understanding of the soil.

My method has largely followed his from then on, with consistently good results.  It is a “minimum tillage” method which leaves all but the top inch or two of the soil undisturbed, to get the benefit from its natural fertility. No chemicals are used.

The other thing to consider is the choice of variety.  I have tried many different ones, including hard red wheat bought in packets from health food shops, and modern commercial white varieties either bought commercially or cadged off farming friends. However long-straw heritage grains are my favourite.  Not only are they more flavoursome, but they are also more practical: their length means that they tend to out-compete weeds, are more resistant to being eaten by birds and also involve less bending down to harvest by hand – more on this later.  I was lucky to be able to get hold of a few kg of April bearded wheat from John Letts, the heritage grain guru, via an SFTG member about 5 years ago.  Ever since, I have been using saved seed from this original stock, which builds up resilience and diversity – something that John strongly advocates.

I should also say that I have only ever grown spring wheat, not winter wheat.  Again, this puts me in the prehistoric farmer camp, as records show that their wheat used to be sown in spring.  I think that spring wheat better fits with traditional farming because it maximises vegetation cover.  Sheep can graze on the pasture all winter.  It also reduces the problem of pest damage during the winter, particularly by slugs.

So, to the details of the method:  The cover crop has two functions:  firstly it ensures that the soil is healthy and fertile – the longer that soil is left bare of vegetation, the less life and fertility there is. Secondly the crop residue provides fertility.  The idea is to cultivate down to a shallow depth of, say a couple of inches, which chops the roots and kills the cover crop,  produces a mulch of soil mixed with vegetation and leaves the soil below intact and therefore alive and fertile.  The best time to sow is during a dry period in April, when the soil is moist enough to be cultivated but not waterlogged or hard-baked.  My cover crop has always been grass, either permanent pasture or a rye/clover ley.  I have rotavated with a 2-wheel tractor but now have a 4-wheeler.   The cultivation could in theory be done by shallow ploughing or by hand – as indeed it must have been before the invention of the plough. In good pasture soil, two or maybe three passes with the rotavator on its shallowest setting are enough.  Top tips – make the passes perpendicular to each other and don’t go too slow. Experiment with the back flap open/half closed. 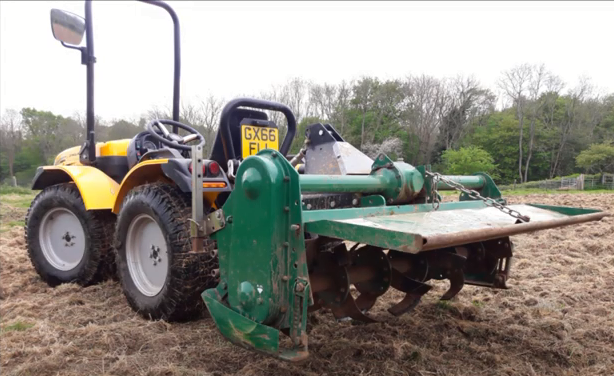 At this stage, Wenz applies a liquid spray of essential micro-organisms which helps the cut vegetation to decompose without putrefying.  This spray is made from charcoal, soil, raw milk, yeast molasses and other such good stuff.  I think this is more important if, like Wenz, your cover crop is quite tall and the mulch is therefore high in vegetable volume.  Wenz’s cover crops are a complex mix of specially chosen herbs and grasses.  The main thing however is to have vegetation cover.

Now you are ready to sow. The seed must be placed on the top of the undisturbed soil because it can then absorb the soil’s moisture for quick germination and the plant can root into soil which has all its life and structure intact.

Drills are an option for this (see the Planet Junior hand drill in the photo below) but for quality and assurance, there is nothing to beat digging a furrow.  I create furrows with a builder’s mattock (or an old man’s tooth as I have heard it called) with the spike ground off to save weight.  Digging furrows is good exercise by the way. When I have made a furrow, I clean it out by hand to expose the undisturbed soil.  Then I sow by dribbling the seed into the furrow.  My rows are 1 foot apart and I use one handful per 7 paces.  This equates to a sowing rate of around 200 kg per hectare.  Then dig your next furrow before covering over the previous one by kicking the ridge back in.  By burying the seed, bird predation is minimised. Remember the old saying about broadcasting for comparison: “One for the rook, one for the crow, one to rot and one to grow”.

Top tips for sowing your wheat:

The seedlings should emerge in about 10 days.

You will need to protect your growing wheat against mammals especially rabbits, badgers and deer.  The best way to do this is electric fencing, which can be taken up for mowing (I use the cheapest push mower) 3 or 4 times during the growing season.  I use rabbit netting which comes in 40m lengths. If you have deer you may need to add one or two strands on top.

The beauty of this method is that now you can more or less leave your wheat alone until harvest time and just enjoy watching the wheat and its wild companions grow.  The wheat should get away and suppress the other vegetation.  Sow too thin and it will get swamped, too thick and it will compete with itself and “lodge” (fall over).  As the crop grows you will come to see a wealth of wildlife, particularly insects, taking residence in your crop.  If you want a shock, visit a field of commercial wheat in July which will be a poisoned desert in comparison.

If all goes well, by late August you should be seeing your wheat turn a golden yellow.  Test the ripeness by biting a few grains – any softness means it’s still too early to harvest.  Now for more prehistoric fun:  we harvest the wheat in the same way reported by Roman historians of the Celts – by snapping off the ears.

This is the most efficient, least wasteful and most enjoyable and sociable way of harvesting that we have found.  It takes about half an hour to pick 10 meters of row, which should yield enough wheat for a 500g loaf.  This is working on the basis of a modest 8-fold increase from seed. If that sounds mad, just ask yourself: what else would I be doing on a sunny August afternoon?  It’s a great opportunity for a chat and we now have several friends who are picking addicts. Top tip: get a good straw hat!

Store your ears in paper/breathable sacks somewhere safe and dry while you consider the next hurdle in the process: threshing.

After the harvest – options for threshing

The un-mechanised method is to:

Many years ago a bemused neighbour and I did just this, using traditional jointed threshing flails, made from holly by my clever brother-in-law Raymond.  It is what our ancestors used to do all winter long in threshing barns.

It was aerobic and fun, if a little dangerous.

After that I found a steam powered thresher at our local transport show, owned by the Burgess family from Cross-in-Hand, who were kind enough to put my wheat through.

Eventually, having seen one in action in Pakistan, I took the plunge and bought a stationary 5 HP thresher from a firm called Basant in Agra, India, which was shipped over for a total cost of around £2,500.

I call it the Taj Mahal and it’s probably the only one in the country.  It can be powered from a tractor PTO and works very well.  Available for hire to local growers!

And so to bread…

Keep your grain safe from rats and mice until you need some flour.  I have an electric mill bought from Ascot smallholders supplies for about £250 many years ago which is still going strong. It can do different grades of flour or meal so is useful for other purposes.

It consists of a hopper which feeds into a compartment with a rotating metal bar enclosed in a sieve.  When the flour is fine enough it falls through the sieve into the plastic barrel below. It’s not considered as good for the baking quality as stone-ground flour because it warms up the grain a bit but it does the trick for me.

I usually mill around 3kg at a time, as needed.  As an alternative, there are a few working wind and water mills in the local area which may be amenable to carry out this task.

Baking with heritage wheat is a whole subject in itself. 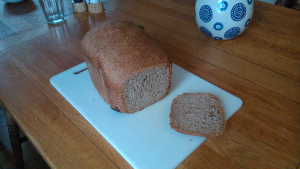 The final result – what could be more satisfying?

Suffice to say that for bread and pizza dough I mix my flour 80:20 with shop-bought white flour and also add some Vitamin C powder to get it to rise better.  Heritage wheat has a nutty flavour and different glutens to modern varieties and some say it is better for those with gluten intolerance.

But the main thing is that, as many of you will know, it’s truly satisfying to eat food which you have (mostly) grown yourself.

(As a final note – if you want to see more of what’s involved, check out Paul’s YouTube channel.)